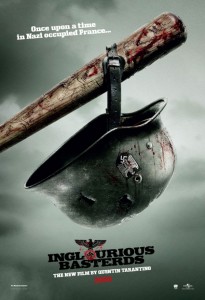 Looks like a miss for some QT fans out there, or could it be QT is changing with age and this is his latest marvel, critics got mixed reviews, but definitely nothing outstanding or worth jumping in your seat about, Pulp Fiction and Jackie Brown are the old days.
Where in the hell did Brad Pitt get that accent from?? (check the trailer below)

Synopsis: Inglourious Basterds takes place in World War II, German-occupied France, a group of Jewish-American soldiers known as “The Basterds” are assigned to spread fear through the Third Reich by scalping and brutally killing Nazis, they are led by Aldo Raine (Brad Pitt). Shosanna Dreyfus a French-Jewish teenage girl (Mélanie Laurent) witnesses her parents being murdered by that nazis, after narrowly escaping she manages to travel to Paris where she owns and manages a movie theater, she later comes across “The Basterds”as they join together, Shosanna reveals her own revenge plan.

“An entertaining yet uneven movie that provides comedy, drama and some interesting psychological twists and turns, but never quite delivers on that ‘men on a mission’ promise.” IGN Movies

“It’s certainly very talky, and there’s no doubt that Tarantino is in love with the sound of his characters’ voices, but QT dialogue is so much better than most other screenwriters that it’s hard to quibble” Empire Magazine

“This unashamed slice of Second World War hokum finds Quentin Tarantino in mischievous form as he takes on the Second World War with the driving force of a roller coaster ride.” Box Office Magazine

“There are some nice-ish performances but everything is just so boring. He should perhaps go back to making cheerfully inventive outrageous films like Kill Bill. Because Kill Adolf hasn’t worked out.” The Guardian

“The film is by no means terrible but those things we think of as being Tarantino-esque, the long  stretches of wickedly funny dialogue, the humor in the violence and outsized  characters strutting across the screen, are largely missing.” Hollywood Reporter