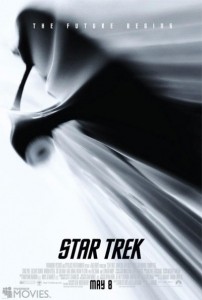 I had to urinate, pretty badly, about halfway through my viewing of Star Trek. The fact that I refused to get up out of my chair is a testament to how entertained I was by this film (it also had something to do with the fact that movies cost over ten dollars these days, and I’ll be damned if I’m going to waste any of that in a bathroom).


The basic review you’ve been hearing is true: It’s an action movie, heavy on the action, but lacking in the thought-provoking and philosophical aspects of the original series.

But I hardly consider this a bad thing. For one, it’s no more mindless than anything else you’re going to see at the box office this year, or any of the past years for that matter. For another, the original Star Trek series was full of philosophy and social commentary, but have any of you watched those old episodes recently? They weren’t very subtle about it. To be honest, the social themes and messages about politics and racism were often a little overdone, no offense to the Trekkies (a term which, I understand, is also offensive).

Basically put, I don’t see how placing such aspects into the first film of a fresh relaunch would have really helped this thing. Perhaps in the inevitable sequel, J.J. and crew will broaden their horizons, but for now I think everything was handled as best as it should have been.

Chris Pine (Captain Kirk) and Zachary Quinto (Spock) rightfully carry the movie, both bringing the best aspects of their respected characters to the screen while also managing an endearing chemistry. Much like original actors Shatner and Nimoy, they play well off of each other, but in addition to the humor, we’re also treated to an underlying animosity between the two characters that works well here. It’s interesting, it’s new for the series, and it makes sense, given the very opposite natures of the two.

My only complaint might be with Eric Bana as the Romulan villain Nero, who doesn’t have a whole lot to do. His revenge-driven bad guy is every one-note, chin-stroking, I’ve-got-an-evil-plan-so-now-listen-to-every-detail stereotype you’ve ever seen in a movie. But oh, well. I guess the team had enough on their plate trying to get the crew chemistry just right.

Ultimately, my primary method of deciding whether a movie is ‘good’ or ‘bad’ is pretty simple. Walking out of the theater I ask myself, “Would I watch that again?”

For Star Trek, the answer is yes.

Although next time, I’d pee first.