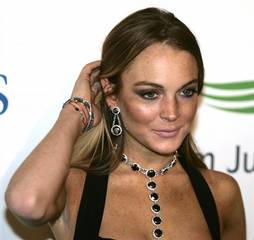 Latest news reports have confirmed that Lindsay Lohan would be stepping in the shoes of Katie Holmes in the movie “The Other Side” to be directed by David Michaels. The movie’s take off has been quite dizzy with the production house facing financial tribulations. Katie had to ultimately move to her new Broadway production “All My Sons” due to prior commitment.

David who is also the co-writer of the script was all too excited with Katie as his leading lady and was quoted saying “Katie would call me from Berlin at 4 a.m. her time to go over ideas and notes. We did this over successive weeks while she was there with Tom when he was filming Valkyrie. The result of our collaboration has tremendously improved the arc and dynamic of the lead character.”

With Katie gone and Lindsay involved with the making the film, David is hopeful that she will be able to share his vision about the intricacies of her character as well as the film.
According to David, Lindsay might get a new lease of life with this film as people’s opinion about her might change with the release, and she is committed in doing so.