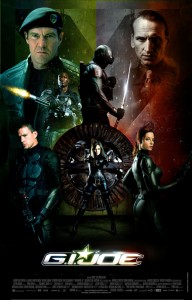 Director Stephen Sommers, best known for The Mummy and The Mummy Returns, is back with  another extraordinary action film “G.I. Joe: The rise of cobra.
“On this occasion a real American hero comes to life to battle the evil forces of cobra.”

It will premier on August 7.

Will it be another action film to recruit soldiers?

I have to admit watching the trailer brought me some exciting child memories.

Cobra vs.  That white ninja!!

I think Im recruiting to the USA army!