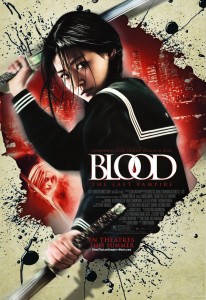 If you want your hair spiked up without visiting the salon, then ask the producer of “Hero” and “Crouching Tiger, Hidden Dragon”. For he comes with his next horror film “Blood: The Last Vampire” (based on the cult animation series), whose story is centered on the theme of demons populating the earth, infesting it and ultimately silencing us with nightmares for many days. Saya; a half human and half samurai vampire kills those who gorge on human blood. Man eats man world..oops! Vampire eats vampire world. As she collaborates up with Council to slash all the vampires, she is sent to an American military base for a face off with a deadly vampire. Finally Saya’s hunt of 400 years ends in a face off with a vampire who is having is last cocktail of blood.