‘Sikandar’- Kashmir is unveiled again, this time through children’s eyes 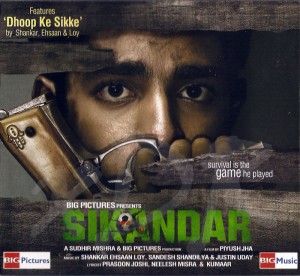 ‘Sikandar’- Kashmir is unveiled again, this time through children’s eyes
‘Sikandar’ is a forthcoming Bollywood Hindi film that features terrorism in Kashmir as its backdrop. Previously known in its production stages as ‘Foot Soldier’, the film will hit theatres on Aug 21. Child actors Parzan Dastur and ‘Black’ fame Ayesha Kapoor play the lead characters whereas famous actors R. Madhavan, Sanjay Suri are in pivotal roles amongst others.
The film is written and directed by Piyush Jha, and produced by Big Pictures and renowned Indian film director and screenwriter Sudhir Mishra, who is known for directing critically acclaimed films like Hazaaron Khwaishein Aisi, Dharavi and Chameli.

Filmmaker Piyush Jha persist that Sikander is not just another film set in Kashmir; but it’s a harsh fact to what we call terrorism where the movie tries to present the situation in the trouble-torn Valley through the innocent eyes of children living there.
“Children are the hope of the country and thus this film is very relevant at this time, especially for the younger generation,” Says Jha, the adfilmaker-turned-director. “It’s a film full of hope but told in a manner that is not preachy. It is involving and intriguing and connects at an emotional level.”
Set in J & K valley, the film centers on a teenage boy, who dreams of playing football at the national level. One day, on his way home from a school football match, Sikandar finds a gun lying on the path. Despite reproach by his newly made school friend, the 14 year old Nasreen, Sikandar picks up the gun and thus begins a journey into the darker side of his nature as things change for him thereafter.
Nasreen tries to deter him from giving in to the lure of the gun, but destiny has kept something else written for the teenager. Sikandar gets involved further where the situations go beyond his control, and people get killed. Everything seems to be all dramatic as the happenings occurring alongside Sikandar’s predicament appears to be not connected. With slow progression, the truth gets uncovered and it becomes clear that Sikandar is the innocent victim in a game being played out between the militants, the army, the peace bartering politicians and the religious heads of the little Kashmiri town.
How things unfold in the end, does the innocent teenage friends come out of the dirty game played by the power-driven people and does destiny turns for their better is all ready to raise the curtain soon.
It’s not a children’s film though the film has children as its protagonist, acclaims Jha, who has made two satirical comedies “Chalo America” and “King Of Bollywood” earlier.
Based on an extensive research, the film is made authentic with a lot of study of the Kashmiri culture with considerable travel across the Valley at length made by the director.
The release of the film got delayed mainly due to the strike in Bollywood over the revenue-sharing row between producers and multiplex owners as the producer-director were waiting for the right slot. Now soon, the movie shot in to what India describes ‘Heaven on earth’ J & K valley will hit theatres with its all-time favorite flavor of the valley culture and northern beauty. Just hope that it comes out be a nice delight for this monsoon.