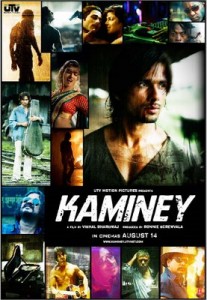 As the story of Kaminey unfolds you will realize why my writing has become so subdued. Because it’s a Vishal Bharadwaj film with Shahid Kapoor in a double role for the first time, Priyanka Chopra as a middle class Maharashtrian girl and Amol Gupte of ‘Taare Zameen Par’ fame as the villain. You can always expect the screen to be lit with magic from a director whose inspiration isn’t Hollywood films but William Shakespeare plays.

As I watched the ‘Dhan te nan’ song on my small idiot box, I realized the gravity of the situation and that it was not one of those insipid movies being doled out at the box office on a regular basis. Sometimes you need a Vishal Bharadwaj movie to make you realize that what you are watching regularly at your nearest theatre necessarily need not be the best. Because there are films like ‘Omkara’, ‘Maqbool’ and hopefully this time ‘Kaminey’ that are supposed to be appreciated and watched in theatres and not when your cablewalla offers them for free.

Charlie: Shahid Kapoor who lives his life betting at the race course and whose existence revolves around the rich & famous. He wants to one of them, may be better off! He is street smart and knows how to play the game.

Guddu: Charlie’s brother (Shahid Kapoor) who is an identical twin physically, but elsewhere he has nothing in common with his kin. He works as a trainee in a NGO firm and wants to be valid member of the upper middle class family. He is career oriented & knows his path is not easy. But he is honest at heart which he loses to Sweety.

Sweety: Priyanka Chopra as Sweety Bhope is young and fiery. She loves Guddu who acts as respite from her goon brother Bhope.

Bhope: Gangster turned politician, he fancies himself as the robin hood of slums and his fanatical ideologies and vandalism are his true character.

Mikhail: A fiery and wild man played by Chandan Roy who dreams of being a high profile bookie just like Charlie. His acts before he thinks for which he ultimately pays the price.

Lobo & Lele: Corrupted narcotics officers played by Shiv Subrahmanyam and Hrishikesh Joshi who are puppets at the hands of mafia.

Tashi: King of the drug business with immense patience but if you hit his wrong side its hell on earth

Charlie and Guddu are twins born and brought up in Dharavi, the biggest slum in the world. They are physically identical but their thoughts differ so much that they hate each other. But they have one more thing in common; their speech defect. While Charlie lisps, Guddu stammers.

Charlie is deep rooted in the world of horse race gambling of which he wants to be the king. Guddu on the other hands prefers to climb his career ladder hoping to fulfill his ambitions. Their dreams might have kept them apart for so much as now, but their paths cross as they get entangled in their personal turmoil’s. Charlie gets fixed in get-rich-quick scheme while Guddu has to pay the price for loving Sweety who is Bhope’s sister and now pregnant. Drugs, mafia, corrupts cops and politician, cold blooded murders, gangsters start tightly encircling them, unless they realize that the only way to get out of this mess, is to take help of their mirror faced brother.

An excellent trailer with titles rolling like “This fummer” and “Discover your mean fide” awaits you below: