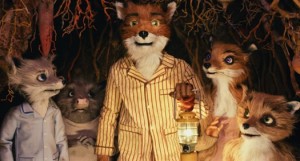 Kiddies are gone have more fun as they glue their eyes to the comp to watch the first trailer of Fantastic Mr.Fox an animation movie based on a children’s book written by Roald Dahl. Roald Dahl has previously authored the book, ‘Charlie & the Chocolate Factory’ that has broken many records all around the world and the movie version is still a hit among children as well as adults. The voice overs for Fantastic Mr.Fox have been given by George Clooney, Meryl Streep, Owen Wilson, Bill Murray, Cate Blanchett and Jason Schwartzman.
Story: Mr. & Mrs. Fox are leading a perfect life with their son Ash and nephew Kristopherson. But after 12 years, his wild instincts start showing up as he gets bored of his idyllic ways. He returns back to his cunning self of a devious chicken thief thereby endangering his family and colleagues. His neighbor farmers Boggis, Bunce and Bean are all ready to trap him at any cost and it’s up to Mr. Fox and his friends, who are trapped underground, to fight against them and save themselves.