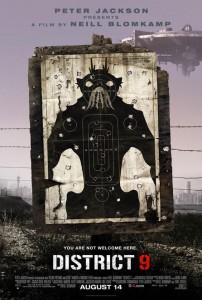 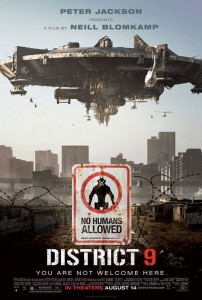 Fiction films somehow, I have always found to be abrupt may be the films that I have seen haven’t followed the natural course of story telling. For me fiction may be untrue, but the movie should be as realistic as possible, so much so that when you come out of the theatre, you start doubting your capability of not initially believing in the story. The Da Vinci Code had created such ripples and I wish to concentrate the same belief in District 9 as well.
Alien films have mostly been based on the thought process that human race has been attacked and held captive. Not really has the other part of the story been explored, where aliens have been restricted to an area, being treated as slaves and dismissed the right to return to their home.
District 9 is based on a short film ‘Alive in Joburg‘ by Blomkamp himself, it explores the existence of aliens in a secluded area in South Africa where they were held captive and made to work as slaves.
In the movie aliens arrived on earth 28 years ago preceding to the start of the film where they were not in the dominant position to control or attack humanity. People waited with baited breath for their second destructive stroke or a possible technological know-how beyond the reach of human intelligence. But none came, as the aliens were refugees themselves and the last existing survivors of their planet. They are set up in a temporary residence in District 9 in South Africa where nobody knew what exactly their future is. As time flew by their control istransferred to Multi-National United (MNU) an organization who has no interest in the alien’s rehabilitation. They instead are concerned in controlling the alien weaponry which is possible only through their DNA.
This releases a round of frustration and tension amongst humans and aliens where things come to a stage when the head of MNU Wikus van der Merwe (Sharlto Copley) contracts a mysterious alien virus that starts altering his DNA. His physical form starts changing as he grows an alien claw in place of hand that has the power to operate alien weaponary.
He is now the most wanted man on earth and everybody and anybody are searching for him to trap his physical being and knowledge to unlock alien secrets. Special mention for Koobus (David James); MNU’s chief and the film’s villain. He takes refuge in District 9 where is comes in contact with Christopher (Jason Cope); the alien and the reason for his state.
The film which is being released on August 14 is being promoted excellently if you visit their multiple official sites and watch the official trailer.
Sometimes you wonder, is what we see the truth ? or sometimes we need to release out our mental blockages to go beyond the said truth.
The picture has been official rated as “Restricted” by MPAA for bloody violence and pervasive language

Alive in Joburg by Neill Blomkamp: