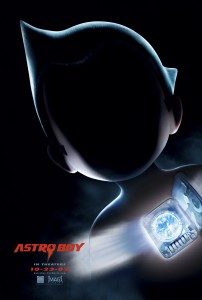 A spectacular animated film full of thrilling and superhuman adventures of its hero ‘Astro-Boy’ gets ready to capture hearts of animation fans when it assumes life on-screen on October 23rd 2009. Produced by Imagi Animation Studios in CGI animation the story is set in futuristic Metro City where a young humanized robot is assigned unbelievable powers by his gifted creator-cum-father Tenma (Nicolas Cage). The robot called as Astro Boy (Freddie Highmore) is Tenna’s visualization of his lost son, but the robot is unable to fill in the emotional gap that his son has left behind. Astro boy is power-driven by positive “blue” energy that bestows him with supernatural abilities like tremendous strength, x-ray vision and capability to fly at a lightening speed.
As Astro boy takes his flights off on adventure travels to gain acceptance he comes across various distinct people with vibrant personalities that make him realize what a delight it is to be in a human form. He returns back to his Metro City when he learns that his friends and family are in danger and with super hero powers he gallantly fights the negative forces to save what he cares about the most and to reconcile with his father who had earlier rejected him.
Astro boy is based on the immensely successful Japanese franchise of the same name by animator and Doctor Osamu Tezuka. The film is directed by David Bowers and produced by Maryann Garger.