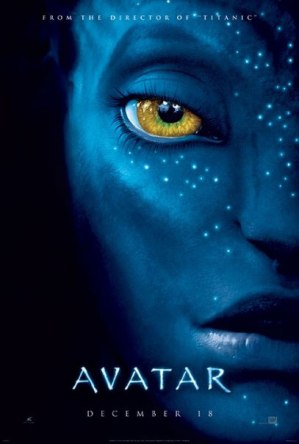 ‘Avatar’ an upcoming sci-fi action adventure film directed by James Cameron, will finally open to international audiences on December 18, 2009. Produced-Directed by the man who sweeped the box office and Oscars in 1997 with his Leonardo di Caprio starrer ‘Titanic’, James Cameron will reinvent himself with the ‘Avatar’ a 3-D science fiction film made using the latest intuitive CGI technologies by WETA digital. WETA is well known in the animation and film industry for its work in movies like ‘Lord of the Rings’ sequels and ‘King Kong’. ‘Avatar’ is publicized to be the third most expensive film ever with a whopping budget of $237 million.
The story is set in a distant moon Pandora where a paraplegic ex-marine Jake Sully (Sam Worthington) finds himself plunged into an unfriendly alien world filled with magnificent looking humanoid creatures known as Na’vi. Jake unsuspectingly is set upon a mission to invade the jungles of Pandora for which he is transformed into an ‘Avatar’, an alien body with a human mind. As an Avatar he is able to walk again, but now he has to fight a double edged heroic battle for both his survival and that of the alien civilization – Na’vi.