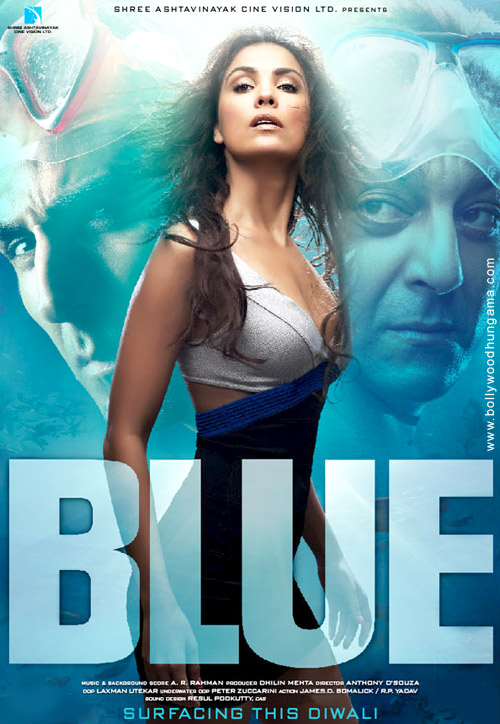 Blue – one of the most expensive films to be made till date in Bollywood is all about exploring the dangerous waves of the oceans; you either sink forever in the depths of eternity or are carried onshore by the tidal waves of your luck.
A place that is abundant is flora and fauna; Bahamas has also attracted towards itself three men from different walks of life, each with shady motive. The rippling water that guard’s nature’s bounty also has kept a dark secret for ages. A treasure that no one has been able to discover and those who have tried haven’t returned alive.

Rumors aboard Sagar (Sanjay Dutt); an excellent scuba diver, Aarav (Akshay Kumar) his arrogant and rich friend and Sam (Zayed Khan), Sagar’s brother all are mesmerized by the depths of the ocean to unravel the treasure that is safely watched over by deadly sharks.

For Sagar the treasure is a mean to save his girlfriend Mona (Lara Dutta) and brother, for Aarav its greed and the adrenalin rush to attempt the impossible while for Sam it a matter of life & death.
How the clear, transparent waters of the Pacific turn murky due to emotions and intentions involved forms the plot of this thriller.
The film is intended to release on October 16, 2009