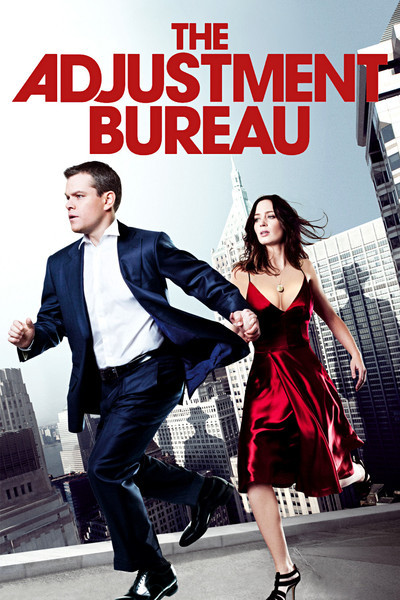 The Adjustment Bureau directed by George Nolfi, is another short story made into film taken from the rich vein of Phillip K. Dick’s back catalogue. After Blade Runner, Total Recall and Minority Report, one might have expected something equally exciting. In fact, this film almost appears plot-less, struggling to fill the 106 minutes (padded out in fine style by Emily Blunt as a gifted modern dancer). The premise is the classic debate of ‘do we really have free-will?’ Nolfi’s film has used more ideas from the Matrix, Sliding Doors and the most excellent Monsters Inc than the original short story ‘The Adjustment Team’. David Norris (MATT DAMON) is a congressman running for the Senate, whilst practicing his speech in the men’s room he encounters Elise (EMILY BLUNT) after some verbal flirting and a kiss they fall in love, instantly. Meeting her changes the course of his career, because of something she says to him. The next day he bumps into Blunt, and takes her number, upon arriving at the office, he fails to notice that everyone appears to have been put on pause. He enters the boardroom to find a group of men dressed in black combats, natty suits and fedoras who are electronically scanning his colleagues and friend. He attempts to run but the men of the ‘Adjustment Bureau’ detain him. He is told he was never supposed to meet Blunt the second time and that if he wants his career to flourish, he must give her up. They dispose of the telephone number Blunt has given him, and because he doesn’t even know her name, he is unable to find her.

Track forward three years, he’s still carrying a torch for Blunt and is attempting to trace her, during the previous three years he has taken the bus everyday at the same time, in the hope that he might bump into her again, but the Bureau have already told him, that they will always interfere and ‘adjust’ situations, so that they will never meet. That’s the whole plot. This film isn’t a thriller, nor really an action movie it just falls between the two stools, and the romance between Damon and Blunt, is questionably believable. I love Damon, but he’d better get himself into an action comedy and soon. Although the film asks interesting philosophical questions, there’s no depth to any of the answers. TERENCE STAMP does another of his veteran turns, nothing new there, ANTHONY MACKIE is a great actor and has been in some great movies, recently The Hurt Locker, he’s good in this but the writing is not muscular enough. However, he does carry the suit wearing, fedora toting, 1940’s agent look very well though. But on the whole the film doesn’t get out of 2nd gear. New York City dazzles in it’s rôle. Now that I have lowered your expectations you will be better able to enjoy the film!