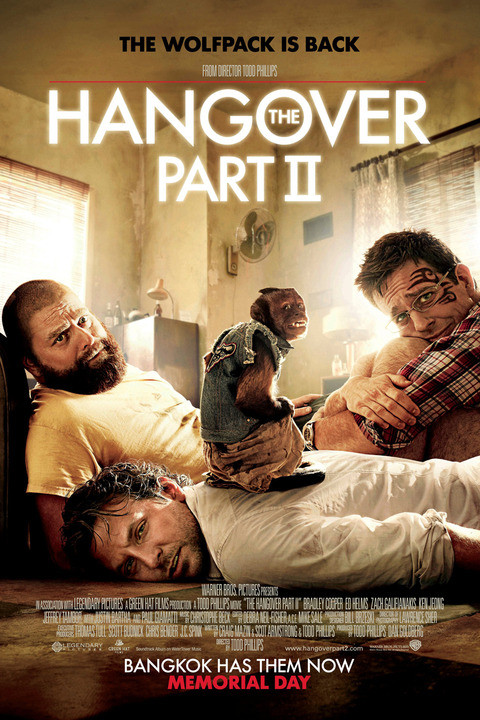 The sequel to The Hangover directed by Todd Phillips is another excuse for the boys to move their infantile pranks to a seedier location, possibly in a bid to explore how far they could go into the territory of excess. If you saw The Hangover then you’ve pretty much seen this film, the story is exactly the same, four guys on a stag night wake up the following day with no recollection of where or what they have done, except they now have a capuchin monkey instead of a tiger in the bedroom. The players are the same, Bradley Cooper, Zach Galifianakis and Ed Helms wake up after going for ‘one’ drink and find themselves in a filthy hotel room in Bangkok. Phillips has obviously decided that the original template of ‘The Hangover’ was so good that he would use it again, only problem is that the first screenplay was written by Jon Lucas and Scott Moore, and it had a genuinely funny and original look at men behaving badly. This time the screenplay has been written by Craig Mazin and Scot Armstrong, however, they have nothing new to add.

The film is a poor carbon copy of the first, the characters portrayed are all stereotypes and the misogynistic and racist jokes fall flat because they are so low rent, they’re not even funny.

Ed Helms’ character ‘Stu’ is getting married in Thailand to a beautiful young woman, how implausible is it that he would be able to attract such a woman, especially given her father hates him? There is no background given for this odd match, and disbelief grows to astonishment when he turns up with a face tattoo – on his wedding day (Nick Cassavetes has a cameo as the tattoo artist), and his fiancee doesn’t even seem to mind?!

And why does the film title have roman numerals for the number two. This film is so low-brow, surely this should have been the number 2, or am I missing the point and that it is another lame joke? Well this film is definitely a ‘number two’ – don’t buy the DVD just watch it when it finally comes to the small screen, however, I wouldn’t even bother to do that, life is too short to waste an hour and 42 minutes on this kind of rubbish.