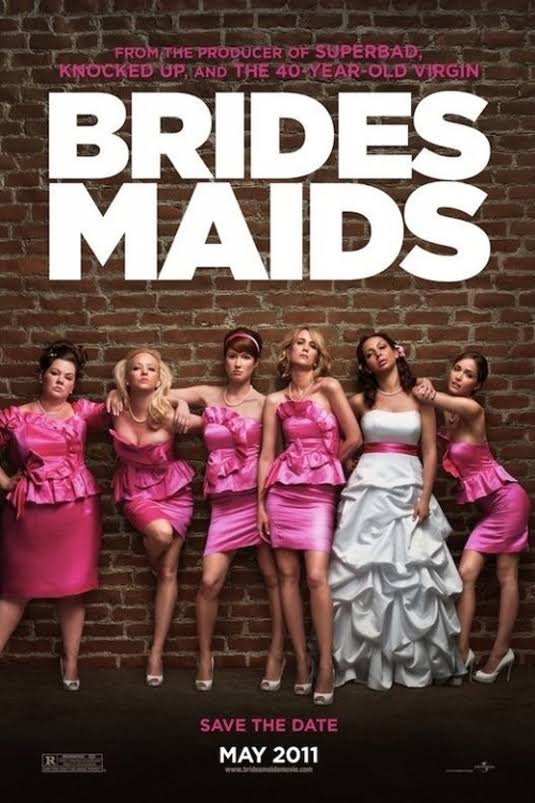 Bridesmaids by PAUL FEIG director of Knocked Up, is a fine example of the romantic comedy genre. Produced by Judd Apatow, who, once again, doesn’t fail to recognise good box office (also produced 40 Year Old Virgin, Forgetting Sarah Marshall and Anchorman, to name but a few). The film is a delightfully light-hearted, look at the life of Annie, played by KRISTEN WILG, who also co-wrote the screenplay. Annie is best friend of the bride to be, Lillian, MAYA RUDOLPH (Daughter of the singer Minnie Ripperton), she has a failed business and is in denial about her current relationship.

Just as her life is falling apart, Lillian, asks her to be her Maid of Honour, no problem there, it should be easy as they’ve known each other their entire lives, but Lillian has a new best friend Helen (ROSE BYRNE), who is glamorous, super rich, and not content to be just one of the bridesmaids. Annie, in contrast has a job she hates in a jewellery store, 350 dollars in the bank and rent due. The two women, vie not only for the affections of the bride-to-be, but for the kudos of being Maid of Honour; some of the most tragi-comic moments of the film are played out through their warring.

The film begins with Annie in bed with her ‘f*** buddy’ being manhandled literally and pretending to enjoy it. Oddly, when Annie does eventually get into bed with someone with whom she is in tune with, we don’t see the sex scenes and are left to imagine that they are a great step up from what she was accustomed to, the decision not to show the scene between Annie and the cop is perhaps because there is no on-screen chemistry between them The on-screen sexual chemistry is left to the larger than life character of the groom’s sister, Megan, MELISSA McCARTY, whose hilarious antics are a real highlight in the film, especially the scene with the meeting between her and her real life husband BEN FALCONE, who plays an Air Marshall meeting on a plane bound for Las Vegas, it is so funny and the development of her character is a lesson in how not to ‘judge a book by its cover’. Man that woman is limber!

Before the trip to Vegas Annie has to contrive a hen party on a budget and takes the motley group of bridesmaids to a Brazilian restaurant, where everyone gets food poisoning, giving rise to an absolutely gross scene in an exclusive bridal shop entirely carpeted in white with only one toilet, oh and a sink!

The film has flashes of the Farrelly brother humour aka There’s Something About Mary’ and also the toilet humour of Dumb and Dumber, but this comedy is of a higher calibre, more akin to the Nora Ephron perspective, well it was written by two women. There’s a wasted cameo by British comedian Matt Lucas as Annie’s flat-mate which fails to ignite, however, the actress who plays his sister is spookily believable as a genetic sibling.

This is a very funny film (except for the policeman’s fake Irish accent-not funny at all) and a great chick-flick that your boyfriend will love too.