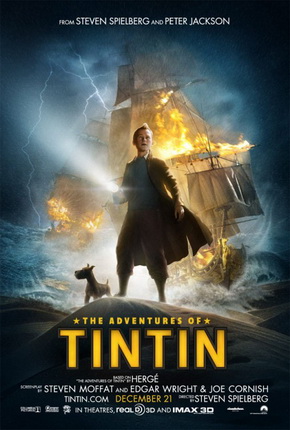 Based on: The Adventures of Tintin by
Hergé

From Oscar winning director, Steven Spielberg comes the 3D animated version of Belgian artist Hergé’s iconic character – Tintin. In his new film, produced by Peter Jackson, and written by Steven Moffat, Edgar Wright and Joe Cornish, Steven Spielberg recounts the story of Tintin and Captain Haddock who have set on a secret treasure hunt for a sunken ship commanded by Haddock’s ancestor. But there are others who are in search for mysterious ship as well.  Learn about Tintin’s turbulent pursuit for the final resting place of The Unicorn – the shipwreck that will answer all the treasure queries. Joining him on the adventure is his dog Snowy and the clumsy detectives Thompson & Thompson.