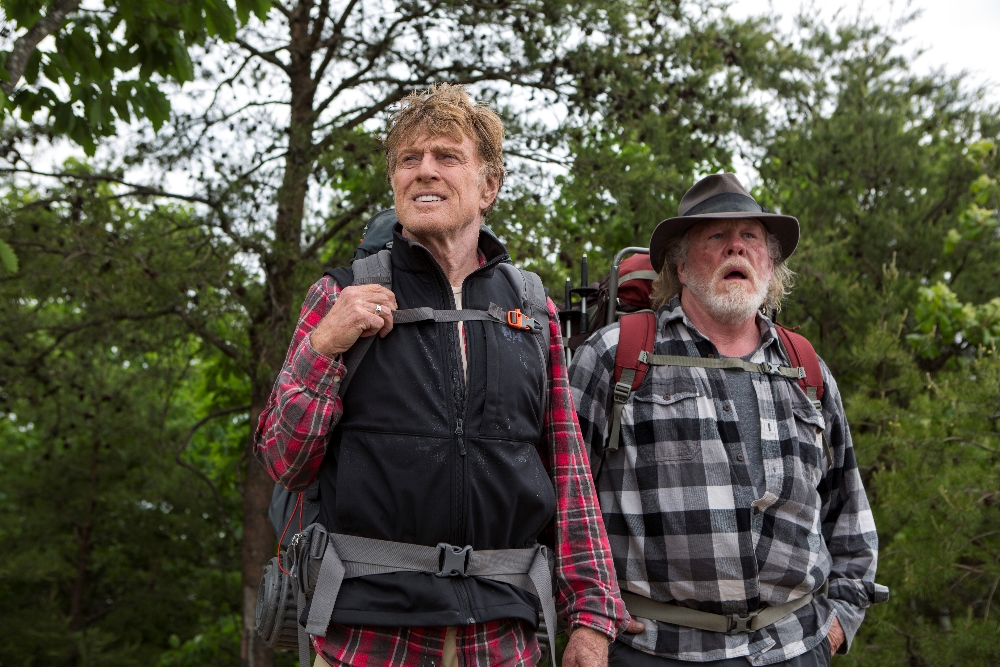 The ad campaign for Ken Kwapis‘ A Walk in the Woods gives the impression that it’s a geriatric version of last year’s Wild: two geezers hike the Appalachian Trail and discover the True Meaning of Life along the way. And there’s a bit of that, to be sure, but the overall tone is comedic rather than revelatory — Grumpy Old Hikers, if you will. I’m not familiar with the memoir on which the movie is based, but I think comedy was the right approach. It’s a decent entertainment, even if there are a few dropped threads and jokes that don’t quite hit the target.

Robert Redford stars as Bill Bryson, a travel writer from New Hampshire who decides to hike the famed 2,000-plus-mile trail after the funeral of yet another close acquaintance. When his wife (the ever-lovely Emma Thompson) informs him that he can’t possibly undertake this journey alone (yet shows no interest in accompanying him herself), he makes a few calls, but comes up empty. That is, until Stephen Katz (Nick Nolte) gets in touch, having heard about Bryson’s plans through a mutual friend. Shambling, overweight, his face a perpetual shade of eggplant, Katz is emphatically the last person you’d invite along on such an adventure. If the movie weren’t based on a true story, I would have scoffed at the idea that this fellow could last as much as a day on the AT. In fact, Nolte’s casting feels suspiciously like a ploy to make the craggy Redford look that much more handsome in comparison. Since it actually works, though, and since Nolte is terrific in the role, all is forgiven.

The relationship between Bryson and Katz — youthful, booze-soaked adventures, followed by estrangement when Bryson settled down to raise a family — is well represented and believable without being heavy-handed, and their physical foil gives the movie a Planes, Trains and Automobiles feel at times. This is, in a sense, a road movie without the car — it follows the pair through their adventures both on and off the trail, with almost as much time devoted to the latter as the former. Kristen Schaal has juicy fun playing a terminally annoying fellow thru-hiker, and Mary Steenburgen turns up as a friendly but obviously lonely hotel proprietor. These scenes have a nice flow to them, even if it’s unlikely that either of these men would still be up for flirtatious banter at the end of the day. After covering mileage in the double digits over the punishing terrain of the AT, it’s more likely that they’d be checking themselves into the hospital.

After Redford’s grueling turn as the (literal) captain of a sinking ship in 2013’s All is Lost, it’s a pleasure to see him relax into a humorous role, although he’s definitely the straight man here. Bryson is one of those endearingly awkward types, more at home describing the difference between igneous and sedimentary rock than making small talk with the neighbors. Nolte’s character, on the other hand, is a loose cannon, and he’s given many of the script’s best lines. Some of the jokes can be seen coming from a mile away, though, and others don’t really qualify as jokes to begin with. For example: When Katz first appears on screen, he announces that he’s prone to seizures if he doesn’t eat at appointed times. That’s not exactly funny, but the audience at the screening I attended laughed as though it was. Fair enough. However, in a later scene, Katz collapses into his tent as soon as the two men have made camp, with Redford asking, “That’s it? No dinner?” Another laugh, with no further mention of the seizures. Of course, if the guy were really to go into tonic convulsions out in the middle of the woods, it wouldn’t be comedic at all — but then why on earth is it brought up in the first place? It’s moments like this that make you wonder if anyone read the script from start to finish, or if the premise alone was enough to sell it.

These loose threads aren’t fatal to the production, because the scenery alone is enough to make up for them. The Appalachian Trail makes for a stunning canvas, and a movie would have to be wretched indeed to distract viewers from that fact when the vistas make their onscreen appearances. A Walk in the Woods isn’t wretched, just slightly uneven, and requiring suspension of disbelief at times. And the ending is too abrupt by half — I could have handled a longer, more drawn-out goodbye. But the fact that I would have been willing to spend more time in the presence of these characters is a testament to the film’s strengths. If Bryson and Katz ever went on another adventure together, I’d bet that movie would be worth watching as well.