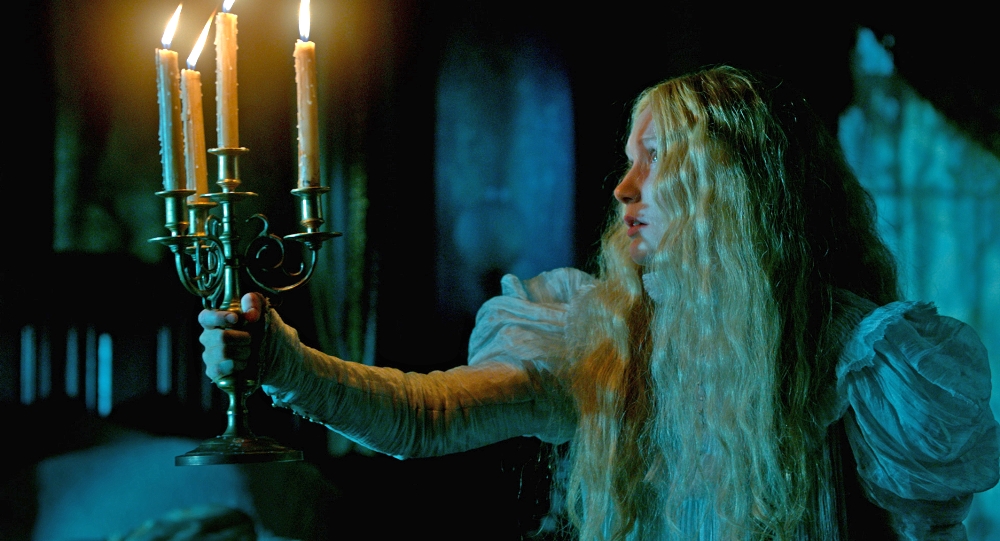 Crimson Peak is a gorgeous slice of cinema, no less than one might expect from visionary director Guillermo del Toro (Pan’s Labyrinth, the Hellboy franchise). Whatever its shortcomings, it’s worth seeing for the dramatic visuals alone: raindrops casting streaked shadows on walls, red clay weeping from the earth to stain fresh snow; the mellow glow of oil lamps; the sweeping, hollow interiors of the mansion called Allerdale Hall. This is a movie you could watch with the sound turned off, and still have a splendid time. Not that that’s really necessary. The story gets bogged down in too many bizarre details at times, and there are a few groan-inducing lines during an otherwise exhilarating climax, but it’s a treat nonetheless — an intoxicating potion concocted of horror and romance in equal parts.

All right, maybe it’s more like seventy-thirty, with the heavier end of the scale tipping toward horror. That won’t matter to fans of the genre, who are far more likely to be the ones buying tickets in the first place. Mia Wasikowska stars as Edith Cushing, an aspiring novelist whose quiet charm has already caught the eye of Alan McMichael (Charlie Hunnam), a young physician. She remains aloof, however, preferring the company of her pen and her father (Jim Beaver), who adores his only child in the familiar manner of widowed cinematic papas. Her attention undergoes a dramatic shift when a British baronet named Thomas Sharpe (Tom Hiddleston, oozing old-world charm from every pore) arrives in her father’s office, ostensibly seeking a business loan. It’s clear from the very start, however, that he would be open to more than just a professional relationship with the Cushing family — the lovely Edith in particular. Edith, who for all her book-smarts is just a sheltered and inexperienced young girl, is mesmerized, despite her father’s immediate assessment that something isn’t quite right about the pauperized aristocrat. Conveniently, Papa Cushing isn’t around to object for long, and soon Edith is headed off to England with her new husband Thomas and his spinster sister, Lucille (a delightfully frosty Jessica Chastain).

The ancestral home of the Sharpes, Allerdale Hall, is one of those masterpieces of set design that doesn’t come along every day (Hogwarts Castle and the Overlook Hotel are among its ancestors). Large chunks of the roof are missing, so that leaves and snowflakes come swirling down into the foyer from above. The mansion was built over a reservoir of bright red clay, which sometimes seeps through the very floorboards and stains the water from the taps. Over the great room fireplace is an inscription in Latin, translating as To the hills we raise our eyes. There’s even a cute little dog in attendance, which comes in particularly handy when the place turns out to be haunted. Yes, naturally it is haunted — something that Edith notices straight off, being attuned to such matters. We’ve already seen her nocturnal visits with her mother’s ghost, who always turns up to deliver the same cryptic warning: Beware of Crimson Peak. No prizes for guessing what nickname the locals have bestowed upon Allerdale Hall.

The ghosts are rendered with more detail and precision than is usual for most horror films, and well suited to del Toro’s extravagant visual style. Like legions of their cinematic brethren, they’re not the most dangerous things in the house, but exist primarily to warn its occupants of a greater evil — and this is where Crimson Peak falters. Details about the Sharpe family history are filled in at odd intervals, and they manage to be both ridiculously over-the-top and boring at the same time. There are no narrative twists here, just confirmation of things we already suspected. Even Edith suspects them, and she’s hardly the brightest candle on the mantle.

What lifts these sagging middle passages — apart from the eye candy — is the strength of the performances. Hiddleston plays Sharpe as a tormented and conflicted man who understands that his good name and courtly manner are the only tools he has left to work with, and knows how to use both to his utmost advantage. He and Wasikowska have a breathless chemistry of the sort that’s impossible to fake; we find ourselves rooting for them even when doing so seems irrational. And Chastain is all icy restraint and forced smiles — until she isn’t, making the transition all the more effective. All three bring more to the characters than the screenplay really requires, which is the definition of good acting.

The finale contains a few welcome shocks, along with a resolution that seems inevitable in retrospect but is nonetheless gripping as we watch it unfold. (My favorite moment —I won’t reveal the specifics — involves a visual homage to del Toro’s own darkly elegant The Devil’s Backbone.) “Ghosts are a metaphor for the past,” Edith informs a curmudgeonly editor in an early scene. In the last moments of Crimson Peak, they’re also a metaphor for lost futures — of roads not taken, words that were never uttered, the tragic circumstances that led them astray.