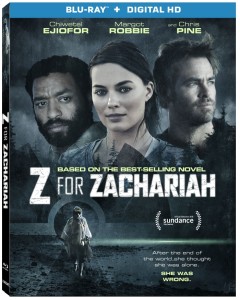 Three actors who are all getting ready to launch into the superhero cinematic world, starred together in a slow moving character study called Z for Zachariah. The film had a limited theatrical run earlier this year and is now available on video. The actors, who are the driving force behind the film, are Chris Pine (Star Trek), Margot Robbie (The Wolf of Wall Street) and Chiwetel Ejiofor (12 Years a Slave). All three provide solid performances in a what ends up being a severely flawed film.

The premise is fascinating. We have an isolated young woman (Robbie) who is living in a beautiful valley where not another living soul can be found. She tends to her farm, hunts with her dog, and ventures into nearby towns to scavenge for supplies. Despite the beauty all around her, we get a clear sense of the horrors of her world as she wears some sort of hazmat suit for her recon activities. Once back in the safety of her own valley, she removes the suit and looks like any other young farm girl.

Then a stranger arrives with his mobile laboratory. He is fully equipped with his own special hazmat suit and radiation detector. The stranger (Ejiofor) is relieved to find the valley as an unexpected place free of radiation dangers. In his haste, he makes a mistake and it is the kind young woman who saves his life.

They bond during his recovery at her house where we learn she is Ann Burden and he is John Loomis. She is alone as her other family members left to look for survivors (“their moral duty”). He is alone having chosen to leave the relative safety of an underground bunker to look for a place where he could “really live.” Coming from distinctly different backgrounds with different backgrounds and diverse views, the couple becomes close in a slow and awkward manner.

They’re new reality is shattered upon the arrival of a stranger – a miner who traveled from a county over and happened to find the safe haven. Caleb (Pine) detects the uneasy relationship between John and Ann and seems to find areas to exploit it. The love triangle assumes from this point on and drives the rest of the film.

Many have been critical of Hollywood’s failure to produce original material over the last few years. While this is not original (based on a novel from the early 70s) the story is a stark contrast the mega hero, over the type productions that have become commonplace. In fact, very little is said during the film about what happened to the world. Some type of nuclear war/attack but there’s no discussion of geopolitics. Only a passing reference to the rest of the world being lost by John.

What’s been made here is not a post apocalyptic film. That’s actually a little bit of misleading marketing. The setting is a post apocalyptic rural America, but that’s only a device used to set up the isolation of the characters. Technically a deserted island, a crashed plane, or another planet would suffice just as well. Viewers expecting a post atomic war thriller will be greatly disappointed. Again, this is a character driven drama and enjoyment is directly linked to how well a viewer connects with the characters.

Despite compelling performances by the three actors, the script lets them down. John Loomis is especially difficult to connect with and yet, more than anyone else, the viewers need to understand him. His pain, his dreams, and his fears are critical as he is the domino makes the rest fall.  More time needs to be spent with him and indeed there are several deleted scenes on the DVD that fill in some of the gaps.

The chemistry between John and Ann is another problem. It’s forced and feels like a badly-arranged blind date. Sure, some of that is intentional, to force each character to consider compromise for the sake of companionship, but there’s never a point of really seeing the two of them click. When it should happen, it feels rushed and even the actors’ performance seems to be at its weakest.

Chris Pine is not given nearly enough script to work with. His character may have had potential to be layered and complex, but his limited time makes him feel very vanilla. Ultimately, he’s a convenient creation to manufacture the love triangle. Which is the most peculiar thing about the film.

It is the dynamic that drives the central conflict of the story as written for the screen. However, the original novel neither included Caleb nor any love triangle. The source material was strictly about John and Ann. So the decision to add this new dynamic that becomes the driving force is puzzling.

In the end, the film is forgettable and a disappointment. That being said, there are bigger things ahead for the three actors. All three shined (as much as script would allow) and Ejiofor and Robbie had some (fleeting) moments. Pine is set to appear in Wonder Woman in 2017. Robbie will be in Suicide Squad next year. Ejiofor is currently filming Doctor Strange. It’s almost a shame, they were allowed to use any superpowers to save this film.

Z for Zachariah is now available on video.

The Making of Z for Zachariah