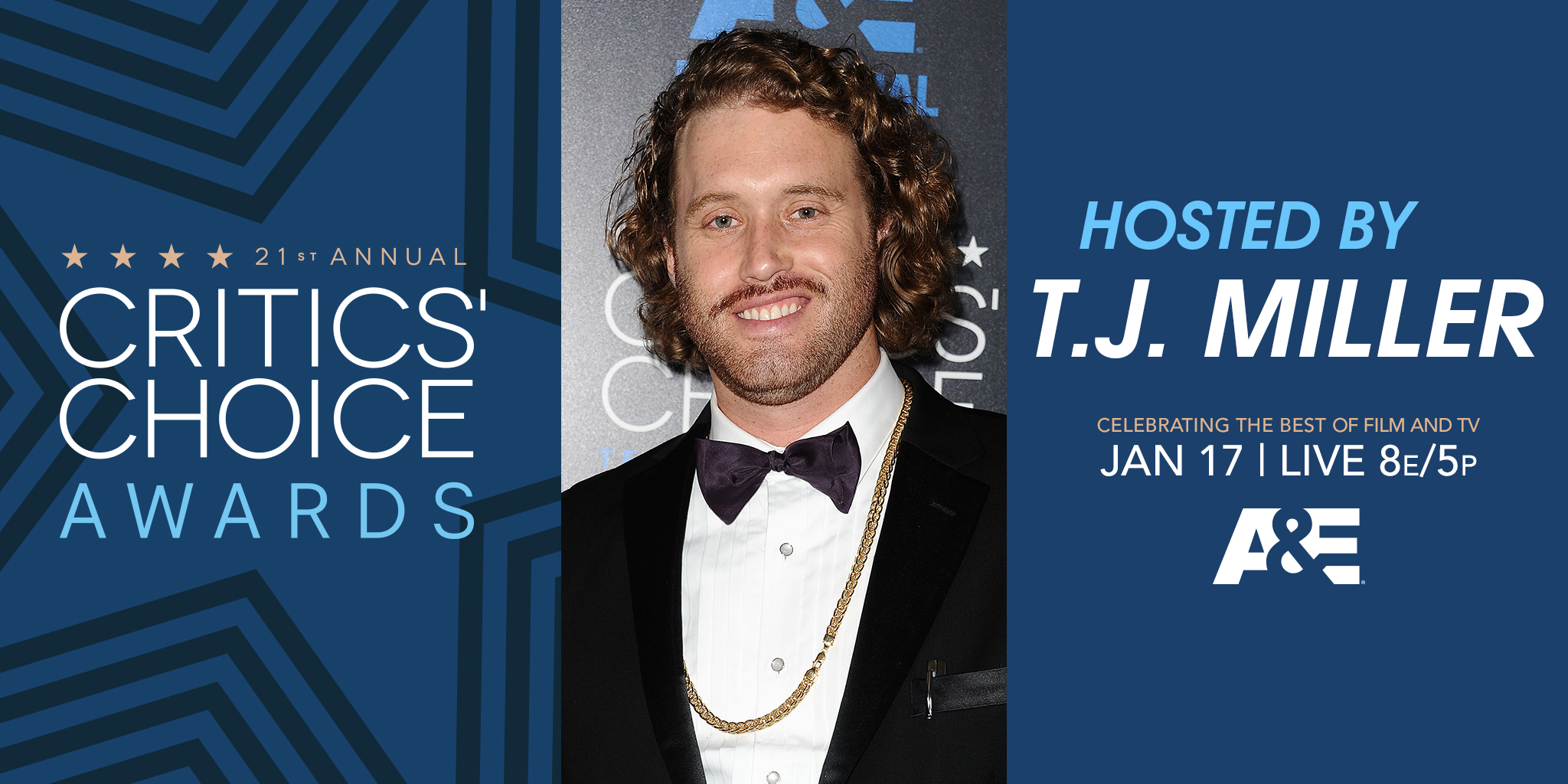 Fans may know T.J. Miller from Silicon Valley, the unfortunately short-lived Goodwin Games, or as the voice of several animated characters, and now he’s going to take on the hosting duties for the 21st Annual Critics’ Choice Awards.

T.J., whose roots are in improv and stand-up comedy, seems like the perfect host for a show, even if he doesn’t quite have the household name status that would make the fact immediately known to everyone. Not only is he hilarious, but he’s one of the more affable actors around, and obviously has proven himself as quick on his feet.

The announcement comes just prior to the nominations announcement, which will be on Monday.

Actor and comedian T.J. Miller will host “The 21st Annual Critics’ Choice Awards,” it was announced today by Elaine Frontain Bryant, Executive Vice President of Programming for A&E, and Joey Berlin, BFCA/BTJA President. A+E Networks, home of “The Critics’ Choice Television Awards” and “The Critics’ Choice Movie Awards” for the past year, will combine the two shows into one star-studded three-hour event. The show will be broadcast from the Barker Hangar in Santa Monica on A&E, Lifetime and LMN on Sunday, January 17 at 8PM ET/5PM PT immediately following “Critics’ Choice Red Carpet Live” on A&E at 7PM ET/4PT.

“We are thrilled to have T.J. join us as host of this exciting night,” said Frontain Bryant. “His quick wit and unique sense of humor serve as the perfect paring as we celebrate the best of television and film together for the first time.”

T.J. Miller stars in HBO’s Emmy and Critics’ Choice Award-winning series “Silicon Valley,” which is currently filming its third season.  The series not only took home the award for “Best Comedy Series” at last year’s Critics’ Choice Television Awards but T.J. also received the award for “Best Supporting Actor.”  He will star opposite Ryan Reynolds in the upcoming Marvel feature “Deadpool” and his voice can be heard on the big screen in the Academy Award winning “Big Hero 6” and the Golden Globe winning “How to Train Your Dragon 2.” Prior to this, T.J. has appeared in a number of major studio films including “Transformers 4,” “Cloverfield,” “She’s Out of My League,” “Seeking for a Friend for End of the World,” “Our Idiot Brother,” “Yogi Bear 3D,” “Unstoppable,” and “Get Him to the Greek.” He is currently writing “Ex-Criminals” for Dreamworks as a starring vehicle for himself.

T.J. is a nationally touring stand-up comedian, boasting an hour long Comedy Central stand-up special titled “T.J. Miller: No Real Reason.” He has released the hip-hop/pop/folk music album “The Extended Play E.P.” and hosts the weekly podcast “Cashing in with T.J. Miller” on nerdist.com. He was also named one of Variety’s “Top 10 Comics to Watch,” and Entertainment Weekly’s “Next Big Things in Comedy.”

“We are so excited with the new direction that this year’s show is taking, combining the film and television awards,” said BFCA/BTJA’s Berlin.  “We are confident that T.J.’s infectious energy will help carry that excitement not only in the room, but also to viewers watching at home.”