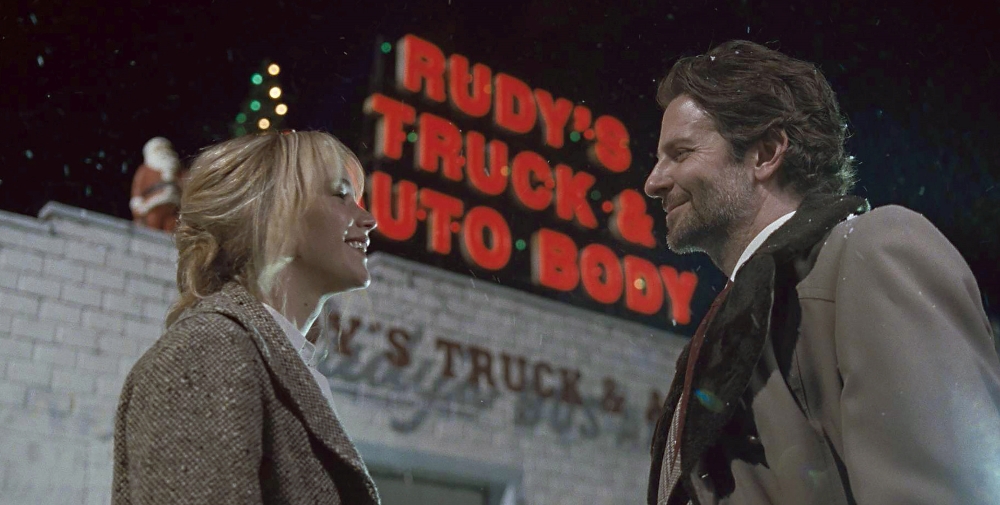 David O. Russell is a master of character above all else, and his recent collaborations with Jennifer Lawrence, Bradley Cooper, and Robert De Niro (2012’s Silver Linings Playbook and 2013’s American Hustle) have been largely entertaining successes, despite the oddity of some casting decisions (a then-23-year-old Lawrence playing the battle-ax mother of a kindergartner in Hustle, for one). This latest entry, Joy, is the weakest one to date. It’s a testament to the strength of the cast, and to Russell’s comfort level with them, that the movie manages to distinguish itself (if only slightly) from your standard rags-to-riches trope. Ultimately, though, they’d all have been better off holding out for a stronger story.

Joy is loosely based on the life of Joy Mangano (portrayed by Lawrence), a Long Island housewife who invented the Miracle Mop in 1990, and went on to patent over one hundred other inventions. Though I’m certain the real Mangano is a thoroughly admirable lady, only a director of Russell’s status could successfully argue that this was a movie crying out to be made. Clearly, he was thinking mainly of giving Lawrence another chance to flex her considerable skills — and it’s a good thing she has them, because a lesser actress would have turned this whole project into a thorough waste of time.

After a floaty flashback that fills us in on Mangano’s childhood and family situation, we’re introduced to the woman herself: a harried and divorced working mother of two young children. The small two-story house she lives in is full to the brim: Her mother, Terry (Virginia Madsen), spends her days watching soap operas in the back bedroom; her wise old Grandma Mimi (Diane Ladd) dispenses Yoda-like wisdom, as well as providing a distracting and unnecessary voice-over. Her ex-husband (Édgar Ramírez), an unemployed Tom Jones wannabe (yes, he actually calls himself that at one point), lives in the basement; as the film begins, he’s joined there by Joy’s father, Rudy (Robert De Niro), who moves back in after his latest paramour has kicked him out. There’s also a half-sister (Elisabeth Röhm) and a childhood friend (Dascha Polanco) lurking on the sidelines. If this sounds like a lot to keep straight, that’s the entire point. We can feel Joy’s near-constant state of frustration; Russell’s favorite way to stage a scene is to have the characters gather in one room and argue with one another. In other films, I’ve found the device amusing (The Fighter is a prime example), but here I found myself wishing he’d trimmed a few of these interludes and shortened the film’s 123-minute running time.

Inspiration strikes one day, in the form of a broken glass of red wine aboard Rudy’s wealthy new girlfriend’s yacht. After slicing open her hands while tending to the spill, Joy comes up with the idea for a hands-free, extra-absorbent mop with a detachable, machine-washable head, using her daughter’s crayons and construction paper for the initial diagrams. The wealthy girlfriend, Trudy (Isabella Rossellini) agrees to fund the project. It’s around this point that the film goes on autopilot, with the obligatory scenes of initial failure, gimlet-eyed resolve, and eventual success playing out like half-hearted notes on a hoarse plastic recorder. When Bradley Cooper turns up as Neil Walker, a QVC executive, we’ve already forgotten he was supposed to be in the film. It’s he who gives Joy her big break, even allowing her to go on camera herself after a disastrous first attempt fails to move the product. While Cooper’s role is small and superfluous, at least it’s a pleasure to see him and Lawrence together again.

Actually, it’s a pleasure to see Lawrence, period, and Russell clearly agrees; Joy makes no secret of the filmmaker’s adoration for his leading lady. Whether she’s confronting a family member or businessperson who has wronged or cheated her in some way, or she’s inwardly celebrating a recent victory, the camera has a tendency to hang back and regard her with unblinking awe. One of the closing scenes, which seems to include the Walker character for the sole purpose of giving Cooper more screen time, is laughable despite Lawrence’s best efforts (she’s seated behind the heavy desk of a dimly lit office, reminding us forcibly of The Godfather).

One more thing, and it may be a minor note, but it’s in a major key. Rudy’s automotive business, whose space Joy utilizes to manufacture her fledgling product, is next door to a makeshift shooting range (i.e., guys in plaid wool jackets shooting glass bottles off of barrels). Fair enough. But when Joy storms out of her father’s building at one point, furious after an altercation over her finances, she heads straight over to fire off a few rounds — mainly so that the film’s trailer could get in a splendid shot of this tough-as-nails chick showing the whole world she means business. It’s a lazy and dangerous trick. Here we have a story about a smart, ambitious businesswoman; an admirable mother; a loving daughter and granddaughter — and she needs to shoot a gun in order to be taken seriously? Really, Hollywood. It’s far past time these stereotypes were laid to rest.