7 Minutes, the first-time writing/directing effort from Jay Martin, unfortunately feels more like a love song to the movies on his list of favorites than an entity unto itself.

It isn’t just that the story spins together the lives of several stereotypes (some that feel lifted directly from other films) in a way that only showcases their commitment to the role, as opposed to the character, but also because the cinematography and scene construction is so wildly noticeable.

A heist gone wrong serves as the point of entry to an exposition on several characters, complete with flashbacks that take us along the merry path leading to the titular 7 minutes, which is how long the heist is supposed to take. It should be a quick grab, and there’s nothing to indicate their should be any problems, but once we learn the story behind the various people, it’s clear that there was never a reason to think anything was going to go right. If only we took these breaks to visit people worth visiting, things might have worked out differently for the film, just as things might have worked out differently for the caper.

Sam (Luke Mitchell) is the central figure, and we get a look at him first, and our travel kicks off because the person our crew is robbing recognizes him. Sam was a football player, and he had a nice scholarship to college, but we soon learn that he now works in a factory, and apparently things didn’t work out. Mike (Jason Ritter) is Sam’s brother, and he’d like to hook some up selling pot, because Sam isn’t making a lot of money. This leads, somehow, to getting Owen (Zane Holtz) involved in things. Soon enough, our three heroes want to up their game, and go to a serious drug dealer to move on to better product. Things go wrong, and now they owe a lot of money to said drug dealer, and the robbery scheme is born.

Our flashbacks include a guard who busts in as the robbery is going down, and another surprise character who shows up to further muck up the already failing plan. The majority of the film actually takes place in the past, cutting back to the present only to detail exactly how sideways this robbery ends up going.

The major failing of the film is that the characters aren’t actually interesting in themselves, leaving the flashbacks a kind of hollow endeavor. It might have worked as a kind of statement piece on how lives spiral out of control, mostly via Sam and the college run that didn’t play out for him, but even he doesn’t manage to sell the unfortunate difficulty of making it, and no one else has a shot at anything. Mike only seems to exist as the entry point to heaping more problems on yourself, and doesn’t get much in the way of detail beyond his role, and Owen hardly even counts as having a role.

Had the film focused more on Sam’s plight, an interesting problem to face, especially as he must find his own version of self-worth in the face of his fiancee, whom he constantly feels he is letting down, it might have worked by using the stereotypical version of everyone else. We might have a deeper story by avoiding the depth of those who surround him, commenting on their ultimate insignificance in relation to his own decisions and efforts. There isn’t enough to Sam for that save, and the construction doesn’t want to deliver anyone else.

Most of this is forgivable, assuming the film gave us a fun ride, and a botched heist worth watching, but it doesn’t. It want to go too slow, thinks it has far more interesting things to say than it does, and frequently bogs down in how it is trying to shoot things. A car ride Sam takes on his way to visiting Mike (a scene which then turns out to be purposeless itself, and could have been a 10-second phone call) seems almost the result of a dare, going on so long that you have to wonder what you’re meant to get out of it, and using an almost unnerving number of angles and pans. You start to think that we are meant to find the metaphor in being involved in a long drive, even though it isn’t, but if there’s meaning found in the fact that he’s got some thinking to do, it isn’t worth the time.

The final result, though not without certain positives, is something not worth the experience of watching, and the overall feel of the film is one that suggests that it thinks very highly of itself. 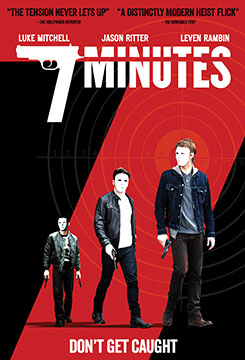