It’s always something special to see a master storyteller at work. There are plenty of great films every year. But there are really only a handful of true master storytellers active in Hollywood today. Steven Spielberg is one of those few. His resume is impressive and his body of work unmatched. One of the things that makes him great is his knack for taking an interesting, albeit not necessarily natural film-worthy story, and turning it into a really good film. With his latest work, Bridge of Spies, that’s exactly what he’s done.

The story centers around an insurance lawyer, James B. Donovan (Tom Hanks), who is asked to do a service to his country by providing required legal counsel to a captured Soviet spy (Mark Rylance). It’s made clear to Donovan early and often that he’s to provide the Constitutionally required representation to the defendant — not a full-fledged defense. It is after all the late 1950s and our world is in the thrusts of the Cold War. In America, communists seem to lurk around every corner, and school children are reminded regularly how to survive an atomic war. It’s not a time for sympathies to a traitor caught in the act.

As you would expect from a character portrayed by Hanks, Donovan is too principled to do his job half-hearted, or worse, betray the confidence of his client. His partner, the trial judge, and even his own family don’t understand his stance and through much of the film he is very much a man on his own. This resilience of principle and loyalty are core traits Donovan shares with only one person — the Soviet spy he’s compelled to defend. The relationship between the two men and the performances of both Hanks and Rylance carry the film through a somewhat dry middle act.

There is a parallel story taking place involving American U-2 pilots and secret flights over the USSR. Ultimately, the capture of a US pilot, played by Austin Stowell (Whiplash), leads to a third act where Donovan finds himself acting as covert emissary for the US. The rest of film teeters on whether the layman diplomat can successfully negotiate a prisoner exchange. While this becomes the focal point of the film, it also erodes what is otherwise a nearly perfect film.

A key element that makes Bridge of Spies so engaging is the relationship between lawyer and spy. Hanks and Rylance command the screen when sharing scenes driven by poetic dialogue and distinctive performances. What we see on screen is much more ordinary in the absence of the two men in a scene together. Granted the story is larger than just the two of them, but their dynamic is much more engaging than the time Hanks spends by himself stumbling through a divided city of Berlin. It doesn’t take away from his performance, or Rylance’s — just emphasizes that both actors seem to bring out something special when on camera together in the film. Ultimately, the shift in focus to what should be a more dramatic plot point deducts from an otherwise near perfect film.

There is little doubt that Hanks will receive much praise and award consideration for his performance. While he is a tremendous actor in his own right, something special happens when he teams up with Spielberg (Saving Private Ryan, The Terminal). Hopefully, the performance of Rylance will not go unnoticed by the same critics and award committees. Clearly less well known, Rylance delivers a fantastic performance powered by nuisances and understated emotions. He doesn’t overact the role, he perfectly becomes the role. He manages to draw audience sympathy to his character and even some admiration for his principled stand. With all respect to Hanks, in many ways Rylance outshines him.

Additionally, the film should receive award consideration for the screenplay written by Ethan and Joel Coen. The brothers are best known for their own films, but here they lend their talents as scribes to this original story. Even though they are not behind the camera on this one, their handprints are all over the final product. The movie is very much Spielberg’s cinematic vision with Coen characters talking. Not so much of the quirky, self-consumed characters we see in films like Fargo or Raising Arizona but more the driven, yet flawed types we met in Miller’s Crossing. Rylance’s Abel is probably the best example of a character who jumps off the screen like so many Coen brothers creations of the past.

In the end, more than anything else this is a Spielberg film. His vision and cinematographic talents are everywhere from conflicts at the Donovan dinner table to the shooting down of an American spy plane. Being the great director that he is, Spielberg’s story is not merely a visual one. Sound effects and most importantly, the score, are superb and used effectively throughout.  Thomas Newman, who also composed the score for the upcoming Spectre, has crafted a delightful soundtrack that carries the emotions of the film to perfection. Spielberg uses the music generously throughout the film, adding to the depth of the story and immersing the audiences into the plight of its characters.

A film that rightfully joins the library of modern classics by its director, Bridge of Spies is a success. It is as much an important tale of a world from not so long ago, as it is modern character drama. In his goal is challenge us to think about our own principles and to what lengths we would go to keep them, Spielberg has delivered. Along the way, he’s also put together a film which will have its name read from the stage of the big theater in Hollywood next February. 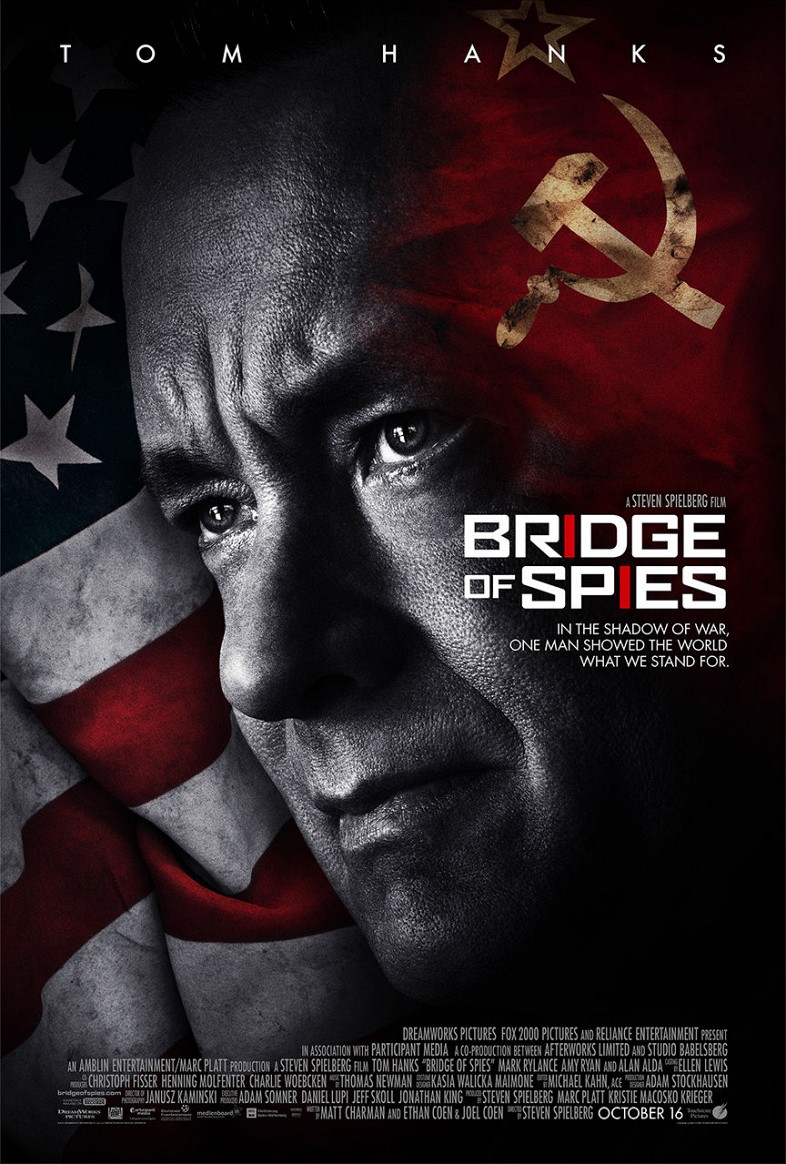