It’s just one person’s opinion, but I don’t feel like Hollywood makes enough good old-fashioned mysteries anymore. Dark tales of a detective scrambling to piece together a mystery against countless obstacles. It seems these films are a lost art of yesteryear. But that’s exactly what you get with Secret in Their Eyes, the latest film starring Julia Roberts, Nicole Kidman, and Chiwetel Ejiofor. The murder of a young woman leads to a mystery and plenty of drama that occurs over a decade in the film. In the end, it’s a story of several plot layers sewn together with the hands of an expert storyteller. Be warned … this is not a feel good film. It’s dark and emotionally draining for both our heroes and the audience. The performances of the three leads (especially Roberts and Ejiofor) have the audience longing for a resolution that ultimately could never be fully satisfying.

The film follows a special team of investigators working out of the Los Angeles District Attorney’s Office. Set in part in 2002, the team is a function of a post-9/11 world where Americans were bracing for the next attack. L.A. was a prime target and the team is focused on counter-terrorism efforts. Their investigation is derailed when a murder victim is found adjacent to a mosque the team has under surveillance. When they respond, they make a terrible discovery. The victim is not a stranger. It’s the only daughter to one of their investigators, Jess played by Julia Roberts.

The film bounces back and forth between 2015 and 2002 to show how the initial investigation went, what went wrong, and how the team attempts to make amends 13 years later. It’s a tricky proposition to keep flipping between time periods and still maintain a coherent story. However, director Billy Ray (who also co-wrote the screenplay) does a great job of holding the viewer’s interest while not getting us lost. The story moves quickly into the grisly murder, before slowing down into more moderate pace of storytelling and character exploration.

Despite marketing by the studio that would tell you otherwise, Ejiofor is very much the lead in this film. Most of the film is told from his perspective as he is our detective trying to put the pieces together. Roberts and Kidman are both pivotal, but in of a supporting cast fashion (I believe the studio is intentionally focused on Roberts in the film’s marketing in an attempt to get the Academy to notice her performance). I don’t know that it needed to be proven, but Ejiofor shows he can carry a film with the best dramatic leads in Hollywood. His character is rich with emotional depth and he plays the complexities to near perfection. If there is any fault, it is that director Billy Ray doesn’t spend more time giving us Ejiofor in solitary scenes. He’s often sharing the screen with Kidman, Roberts, or Dean Norris (AMC’s Breaking Bad). Again, all do an admirable job, but this is Ejiofor’s film to carry.

Which probably will surprise some audiences who are expecting a Julia Roberts driven drama. She’s pivotal but not carrying the film. There are long sections of the story where Roberts is reduced to little more than a fly on the wall. In fact, she makes a fairly abrupt entrance into a critical moment during the film’s third act in a manner that makes the scene feel a bit contrived. Nonetheless, no one is going to question her dramatic talents on this one. She shows again why she is an A-list talent and puts everything into her role. I don’t know that I would consider her performance one worthy of an Oscar nom, but I won’t raise an eyebrow if she gets one anyway.

Kidman’s role in the film is more important to the ripple effect the case had on the lives of its central characters. It was not just Jess who lost everything on the day her daughter was murdered. One of the most interesting elements of the story is how the case inadvertently caused careers and personal choices to change for many characters. There may have even been some time for more exploration there. In particular, Dean Norris’ character (Bumpy) shows flashes of depth beyond the surface, but we are only allowed a glimpse. He’s more important to the film than you might expect and I would’ve liked to have spent some more time on him.

In the end, this film is worth your time but you may not leave the theater happy with it. Again, there’s no happy resolution to the senseless murder of a young woman. And even Roberts slight smile at the end is a good reflection of how most viewers will reluctantly admit they “liked” the film. It’s not easy to like. There is loss, more loss, and scars that won’t ever heal. But as I left the theater I was reminded of another great mystery that left me with a similar kick in my gut.

Yes, maybe a good mystery isn’t supposed to feel good in the end. 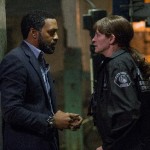 Secret in Their Eyes, which hits on October 23rd, is a film that perhaps overplays an emotional hammer as a... more >