Films that rehash a true story, especially as viewed through the news/investigative team that told the story in the first place, are something of a unique niche, and this year there are two big efforts in the micro-genre. The trick to these films is trying to focus on whether or not we’ve made a good movie, and removing that idea from whether or not it’s a good story. Of course it’s a good story, but is the story behind the story worth telling in the first place, and is it told well?

Spotlight, for those who didn’t get enough Catholic Church exposure with Philomena, looks at the reporting team from The Boston Globe who took on the task of exposing the Church’s child molestation cover up, and brought to light the shocking enormity of the problem.

With the arrival of new editor Marty Baron in 2001, the Globe’s special investigative team Spotlight is assigned to look into the case of a priest accused of molesting children. Led by Walter “Robby” Robinson (Michael Keaton), the team slowly unravels something far more complicated than even they can believe, and soon they find themselves going up against the church to a degree they would never have guessed. They expected to expose the cover up of one priest’s actions, and ultimately discover an entire system of covering up for nearly 90 priests in Boston alone, a number that accounts for thousands of victims.

The film’s real focus is on how the pieces came together, and how the reporters managed to bring it all to light. It isn’t just the dogged pursuit of any lead by Mike Rezendes (Mark Ruffalo), or Sacha Pfeiffer (Rachel McAdams), but the pseudo-political endurance they all weathered as the Church’s influence is brought to bear. To be honest, what efforts the Catholic Church may have made are left by the film as something of a bugaboo that never quite comes into focus, perhaps because the story makes the Church look bad enough, but the idea that “Boston” doesn’t want to look at its ills is delivered adequately, and Boston as character is worked well generally.

Where the film shines is in every moment that it clearly shows that it isn’t about its own story, but is instead about its characters and their effort. Keaton and Ruffalo are somewhat unfortunately hard to match, though Stanley Tucci, who plays Mitchell Garabedian, a lawyer bringing multiple suits against the Church, has no trouble.

Audiences have almost become accustomed to the tradition of trying to hit the story for all it’s worth, with characters who are largely just the vehicles to do so. In Spotlight, we get to see Keaton occasionally meandering the “life” of the story in ways that are not necessarily beneficial to the telling, but let us get to know him, and not as the “news team leader” Hollywood construct, but as the guy who doesn’t actually know exactly what to say when thrust into certain situations, but who has been around enough that he doesn’t have to. Similarly, Ruffalo’s Rezendes doesn’t have all the answers, or any really. He’s just a guy who knows that he’s really pissed off.

It’s an ensemble effort of the highest caliber, with Liev Schrieber managing impressive work in a role that demands to be overlooked, which means it almost becomes distracting to watch the cast simply being these newspeople, because you may miss a few moments of how the pieces fall into place.

The drama is there in spades, of course, but the film manages something more than you’d get from just looking up the articles because it delivers a crew that are as surprised as anyone, and are hopelessly out of their depth, despite the theory that this should be exactly their depth.

To the extent that this is a film about the actual scandal, Spotlight is above-average, but to the extent that it is about a year or so in the lives of a group of people, it’s almost perfect. Your ability to perceive that perfection is perhaps something that is in large part a result of your proximity to a shower as you watch it, but if you can remove what the film is about from what it’s about, this is easily one of the year’s best. 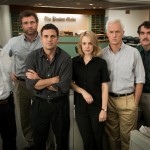 Opening November 6th, Spotlight is loaded with stars, and isn't a film looking to make friends. The new poster and... more > 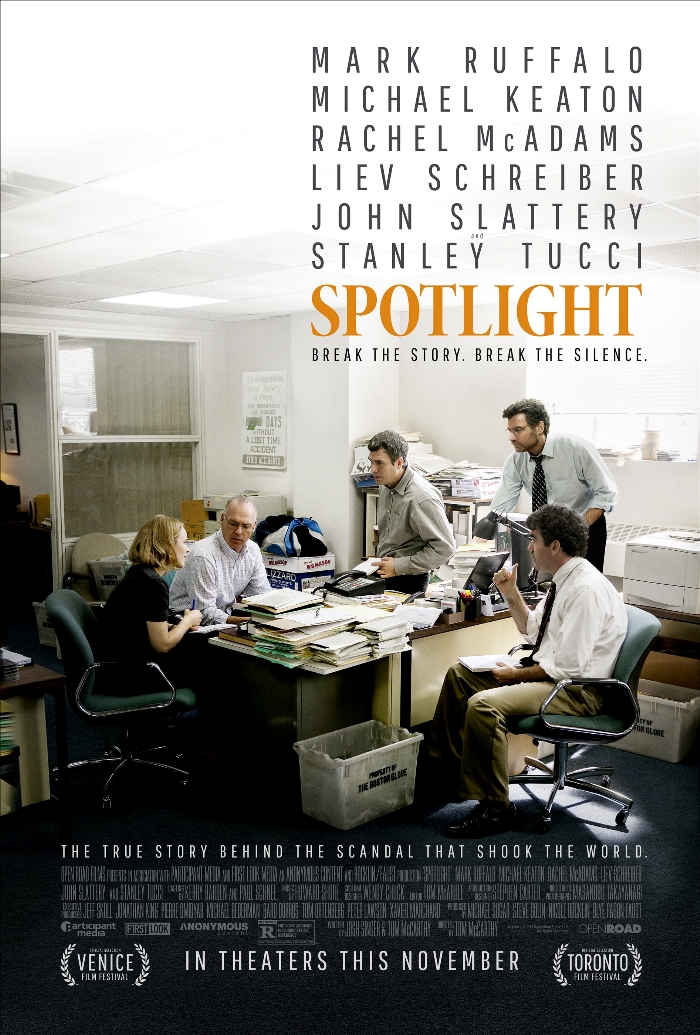